In which I make a terrarium and some sweet bunny cuteness...

Terrariums - they had me at "hello."

I've always loved these miniature worlds-in-a-jar, and I finally got around to making one myself! I thought I'd share the instructions with you in case you would like to make one too...

Sculpey is great stuff - it stays soft until you bake it, and it comes in a variety of colors. I used plain white, and then I used some watered-down brown acrylic paint to "antique" it after baking. I then sealed it with a clear, matte varnish to inhibit mold.

Well, I hope you've enjoyed this little tutorial! Sorry I didn't do step-by-step photos - I got so involved in making it that I forgot to pick up my camera... But it's very simple to make, and lots of fun! This would be a great project to do with your kids. And as you can see, it makes a lovely centerpiece for spring... (or anytime, really).

If you decide to try to make your own terrarium, please take some photos and send me the link! I'd love to see them!

Have a lovely weekend.... thanks for reading.

On the next day much people that were come to the feast, when they heard that Jesus was coming to Jerusalem, Took branches of palm trees, and went forth to meet him, and cried, Hosanna: Blessed is the King of Israel that cometh in the name of the Lord. And Jesus, when he had found a young ass, sat thereon; as it is written, Fear not, daughter of Sion: behold, thy King cometh, sitting on an ass's colt. These things understood not his disciples at the first: but when Jesus was glorified, then remembered they that these things were written of him, and that they had done these things unto him. The people therefore that was with him when he called Lazarus out of his grave, and raised him from the dead, bare record. For this cause the people also met him, for that they heard that he had done this miracle. The Pharisees therefore said among themselves, Perceive ye how ye prevail nothing? behold, the world is gone after him. And there were certain Greeks among them that came up to worship at the feast: The same came therefore to Philip, which was of Bethsaida of Galilee, and desired him, saying, Sir, we would see Jesus. Philip cometh and telleth Andrew: and again Andrew and Philip tell Jesus. And Jesus answered them, saying, The hour is come, that the Son of man should be glorified. Verily, verily, I say unto you, Except a corn of wheat fall into the ground and die, it abideth alone: but if it die, it bringeth forth much fruit. He that loveth his life shall lose it; and he that hateth his life in this world shall keep it unto life eternal. If any man serve me, let him follow me; and where I am, there shall also my servant be: if any man serve me, him will my Father honour. Now is my soul troubled; and what shall I say? Father, save me from this hour: but for this cause came I unto this hour. Father, glorify thy name. Then came there a voice from heaven, saying, I have both glorified it, and will glorify it again. The people therefore, that stood by, and heard it, said that it thundered: others said, An angel spake to him. Jesus answered and said, This voice came not because of me, but for your sakes. Now is the judgment of this world: now shall the prince of this world be cast out. And I, if I be lifted up from the earth, will draw all men unto me. This he said, signifying what death he should die. The people answered him, We have heard out of the law that Christ abideth for ever: and how sayest thou, The Son of man must be lifted up? who is this Son of man? Then Jesus said unto them, Yet a little while is the light with you. Walk while ye have the light, lest darkness come upon you: for he that walketh in darkness knoweth not whither he goeth. While ye have light, believe in the light, that ye may be the children of light. These things spake Jesus, and departed, and did hide himself from them. But though he had done so many miracles before them, yet they believed not on him: That the saying of Esaias the prophet might be fulfilled, which he spake, Lord, who hath believed our report? and to whom hath the arm of the Lord been revealed? Therefore they could not believe, because that Esaias said again, He hath blinded their eyes, and hardened their heart; that they should not see with their eyes, nor understand with their heart, and be converted, and I should heal them. These things said Esaias, when he saw his glory, and spake of him. Nevertheless among the chief rulers also many believed on him; but because of the Pharisees they did not confess him, lest they should be put out of the synagogue: For they loved the praise of men more than the praise of God. Jesus cried and said, He that believeth on me, believeth not on me, but on him that sent me. And he that seeth me seeth him that sent me. I am come a light into the world, that whosoever believeth on me should not abide in darkness. And if any man hear my words, and believe not, I judge him not: for I came not to judge the world, but to save the world. He that rejecteth me, and receiveth not my words, hath one that judgeth him: the word that I have spoken, the same shall judge him in the last day. For I have not spoken of myself; but the Father which sent me, he gave me a commandment, what I should say, and what I should speak. And I know that his commandment is life everlasting: whatsoever I speak therefore, even as the Father said unto me, so I speak.
-John 12:12-50 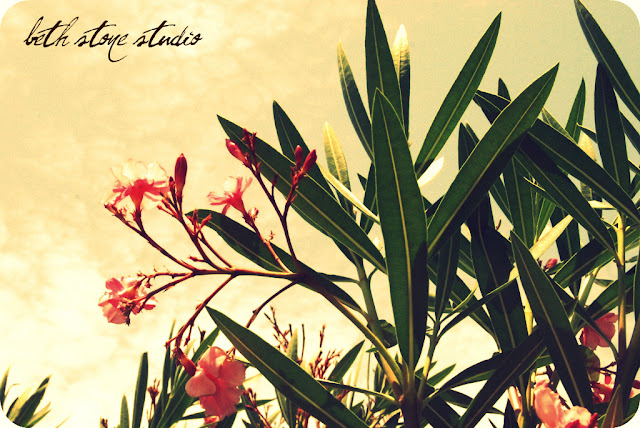 Happy Palm Sunday...
Hosanna!
Posted by Beth Stone at 6:00 AM No comments:

"God is sufficient for God's work... God chose me because I was weak enough. God does not do His great works by large committees. He trains somebody to be quiet enough, and little enough, and then He uses him."
- J. Hudson Taylor
Posted by Beth Stone at 6:00 AM 3 comments: