A Very Thingish Sort of Thing...

﻿
I just learned a Thing from a reader that I had to share with you.... however, once posted, it may turn out to be like one of those sorts of Things that Winnie the Pooh describes in A. A. Milne's classic children's book:
﻿﻿

"When you are a Bear of Very Little Brain, and you Think of Things, you find sometimes that a Thing which seemed very Thingish inside you is quite different when it gets out into the open and has other people looking at it."


But I guess I'll risk it.
I, at any rate, think it's very Thingish.

Anyway, one of my readers had watched the tutorial series on making your own needle felted Pooh that I posted a while back, and she was kind enough to take the time to write a little note to thank me for the videos and to share some very interesting facts with me about the original stuffed animals that inspired the beloved children's books by A.A. Milne. 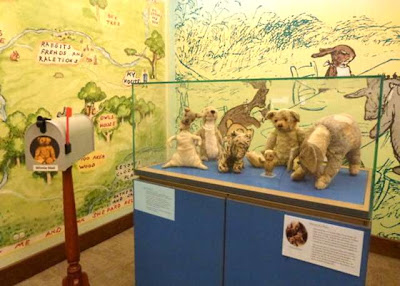 Like me, you may not have been aware (until now) that the original toys that belonged to the REAL Christopher Robin Milne are on permanent display at the New York Public Library.  My reader, whose friend had been hired by Milne's publisher to do some conservation and cleaning work on the toys, got to "meet" Pooh in person and even give him a little squeeze before he went to his new home at the library. How cool is that?


But do you want to know what my favorite "fact" was about the real toys? My reader's friend discovered that Pooh had one loose limb when she was doing the conservation work.... Guess which one it was???

Doesn't that just make you smile? It reminds me of this passage from The Velveteen Rabbit written by Margery Williams and illustrated by William Nicholson:

“What is REAL?" asked the Velveteen Rabbit one day... "Does it mean having things that buzz inside you and a stick-out handle?"

"Real isn't how you are made," said the Skin Horse. "It's a thing that happens to you. When [someone] loves you for a long, long time, not just to play with, but REALLY loves you, then you become Real."

"Does it hurt?" asked the Rabbit.

"Sometimes," said the Skin Horse, for he was always truthful. "When you are Real you don't mind being hurt."

"Does it happen all at once, like being wound up," he asked, "or bit by bit?"

"It doesn't happen all at once," said the Skin Horse. "You become. It takes a long time. That's why it doesn't often happen to people who break easily, or have sharp edges, or who have to be carefully kept.

So, if that's the case, I guess Pooh is a real Bear after all.
Hope you're having a lovely week....
Posted by Beth Stone at 3:27 PM