Well, after holding out for about 31 years, I have recently jumped on the "I've-gotta-have-my-coffee-in-the-morning-or-else..." bandwagon. I blame the Keurig machine that I gave Josh for Christmas (the gift that keeps on giving).

So now, rather than merely enjoying the occasional treat from Starbucks or a cup with dessert at Bible study, as was my former custom, I am sucking it down by the gallon (or at least the large travel mug size) every morning.

I must confess, however, that, although I do love the deliciousness that can be found in the grounds of those fantasticly convenient K-cups, a big part of my love of coffee is flavored creamer, and according to my husband, I like my coffee to be more or less a "liquid version of cake."

"Why, yes, I would like a little coffee with my creamer, thanks!"

However, what I don't like is having to cringe every time I read the label on the store-bought versions... Not only do they contain a lot of sugar and other unhealthy sweeteners, but they also use a bunch of creepy chemicals and preservatives that I'd rather not be consuming every day. Over the past year or so, I've been making efforts to cut way back on my sugar consumption, so this morning I decided I needed to come up with a solution to nip this coffee creamer problem in the bud. After all, little changes here and there add up.

After googling "homemade coffee creamers" and pouring over Pinterest recipes without finding exactly what I wanted, I came up with my own version. I thought I'd share it with you, in case you, too, were looking for something like this. I'm drinking it in my coffee as I write, and I have to tell you, it ain't half bad. So without further ado, here you go.... 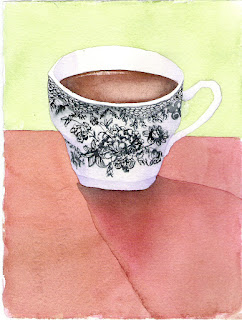 Ingredients:
2 cups Half and Half
4 Tbs. Stevia "Cup for Cup"
2 Tbs. 100% pure maple syrup
3 Tbs. Mexican vanilla
5 dashes each of nutmeg and cinnamon

I poured about 1/4 cup of the half and half into a small saucepan and added the rest of the ingredients, heating and stirring with a whisk until the stevia and maple syrup had dissolved. Then I combined that with the rest of the cream, poured it into a glass bottle, and popped it in the refrigerator. It took me about five minutes to make, so it's definitely something I can do on a regular basis. You could also make a larger batch so that it would last longer - I will probably do that next time, but I didn't want to waste my ingredients in case this turned out to be a flop.

The flavor is actually quite good - it surprised me, because I thought anything other than the "real" creamers (ironic, since just about everything in them is actually artificial!) would be a disappointment, but I can definitely drink this every morning without feeling deprived.

I included the maple syrup and spices to mask the tiny "whang" that sometimes comes along with using stevia, and it seemed to work, although you could probably leave out the maple syrup and substitute unsweetened almond milk if you wanted a truly sugar-free version. However, I'm okay with the tiny amount of sugar that the syrup and half and half add, and it's much less than the store-bought creamers have.

In the future, I may try to come up with some other flavors, but since I use French Vanilla most of the time, this will probably be my go-to recipe...