Well, since everyone else is writing about Valentine's Day crafts and such, I thought I might as well write about pumpkins... 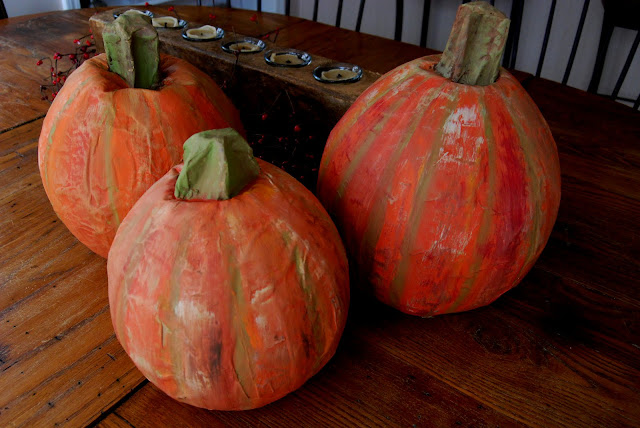 Yes, I realize the timing on this post is a bit odd, but hey, that's what Misc. Mondays are for...

The truth is, I can't show you what I'm currently working on due to its being a surprise for someone from the person who commissioned it, and on the very slim chance that that person might actually read this blog, I can't post the pictures yet! So this will have to do for my creative offerings for today.

Once a month, I do art lessons with my home-schooled nephews, and January's project was papier-mâché. I unfortunately do not have any photos of the pieces in progress (due to the hazards of touching any type of electronic equipment while completely covered in Elmer's glue mixed with water - let me just warn you - papier-mache with three kids and one overly-ambitious, grown-up craft nut is not unlike a somewhat-controlled trainwreck..Do it outside if, like a normal person, you decide to make your pumpkins in September rather than January), so we'll just have to make do with the after photos... I will give you some brief instructions, however.

The boys chose to make the following:
I had been wanting to try pumpkins ever since I saw my friend Barbara's papier-mâché pumpkins at a farmer's market last fall, so here we are... 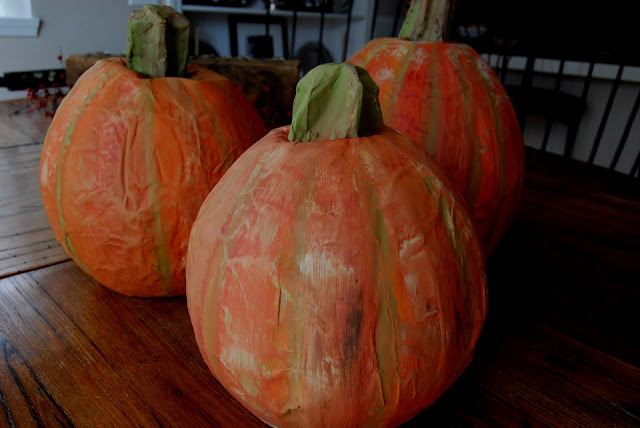 Not quite up to snuff, but it was a rather long day, and I gave out about midnight - there's only so much Elmer's glue that already-chapped hands can take, anyway (I should add here, that the poor little children were NOT kept up doing papier-mache until midnight. No, they were taken home by my sweet husband, who was not covered in Elmer's glue, and had their dinner and were put snugly to bed at a reasonable hour). But I think they're okay - kinda quirky and lumpy, but I think they'll look cute tucked in around my other fall decorations (when fall actually rolls around again). (I'm talking about the pumpkins again now- not the kids, who are not lumpy and will not be tucked around in my fall decorations).

So, for simple papier-mâché projects, you'll need the following:

Start out by creating a "form." For the pumpkins, I used balloons of different sizes, then modified them slightly with cardboard to make the stems. Pumpkin stems apparently have five ridges, so I took two rectangles of cardboard, notched them and connected them, then taped an extra "rib" in between two of the other ribs. Then I used masking tape to attach this to the ballon (over the knot) 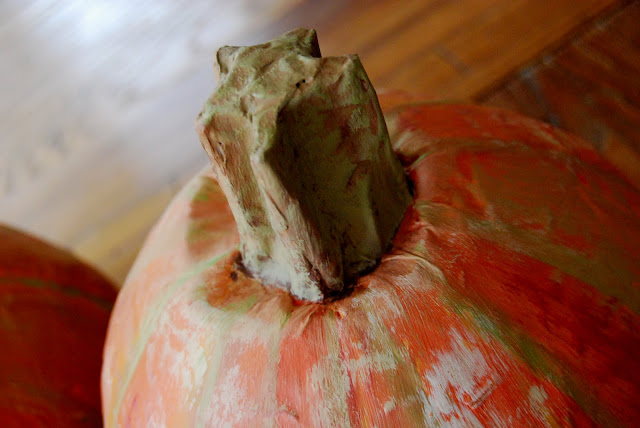 For other forms, you can fashion them with wadded up and taped newspaper, cardboard, ballons, or a combination of all three. Just make sure they're taped together tightly so they hold the shape.

Once you get your form created, then the messy part begins.
Mix 1 part glue with 1 part water in your container and stir well.

Then, you simply begin dipping your strips of newspaper into the glue mixture, "squeegee" off the excess with your fingers, and begin layering the wet strips over your form. Be sure to overlap each piece with the next, and make sure that they are tightly pressed to the form with no "bubbles" or loose ends flapping.

To create the "squashed-in" bottom and stem ends for my pumpkins (pun intended), I allowed my pumpkins (with 6 or 7 layers) to dry overnight, then "popped" the balloons the next morning with a straight pin. Once the balloon was popped, the paper was still pliable enough to allow me to push it down a little (so it would sit flat). Do this carefully though. (And make sure you have plenty of layers and that they are mostly dry first - I lost my first pumpkin because I didn't have enough layers of paper and only allowed it to dry about an hour... which led to a deflated, rotten-looking pumpkin. Gross. Bummer.)

Once they are thoroughly dry, you can paint them as you like! I used acrylic craft paint... and may touch them up a little still. The green lines are a little too prominent, I think. But we'll see... I've got other things I should be working on!

So there's a little tutorial... maybe I'll re-post this again in the fall, when you might actually WANT to look at or think about pumpkins, but I had to have something to show for myself.... :o)

In other news, I was honored to have my watercolor, "Sparrow's Nest,"  featured on the Christian Artists Street Team (CAST Team) on Etsy blog today. The direct link to the post by Phyllis Ducey is HERE. Her post, "Word Pictures," discusses the fact that throughout the Bible, God uses "word pictures" to illustrate Truth. Creation itself is full of evidence that is pointing us to our Creator, if we just have eyes to see it. A driving goal behind all of my work is centered around this concept - I hope that if you see anything beautiful or appealing in my artwork, it will point you back to the One who inspired it, whether it's a little attempt at conveying the beauty of His Creation, conveying the message and images from a great and theologically-sound hymn, portraying some aspect of what it means to be a godly woman, or some other Truth from Scripture.
So, I'm excited and honored not only to have been featured on the CAST blog, but also because Phyllis saw in my work the quality that I am striving to put into it... yay! 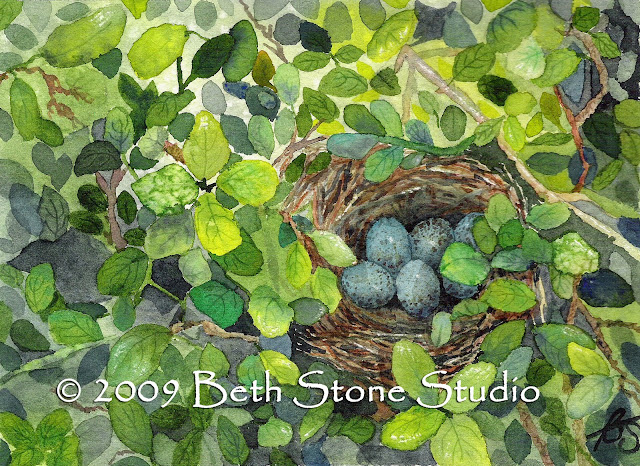 Are not two sparrows sold for a farthing? and one of them shall not fall on the ground without your Father. But the very hairs of your head are all numbered. Fear ye not therefore, ye are of more value than many sparrows. - Matthew 10:29-31
(Prints of this and other pieces are available in my website and Etsy shops -
check the sidebar for the links!)
Hope you have a lovely week....